Palermo International Airport goes by a few different names. As well as the obvious there is Punta Raisi Airport and Falcone-Borsellino Airport. It is situated thirty three kilometres to the west side of Palermo City.

Palermo is Sicily’s capital city.  The airport catered for almost four and a half million passengers last year. You can not get a direct flight from Ireland to Palermo however Ryanair offer a connecting flight from London Stansted. 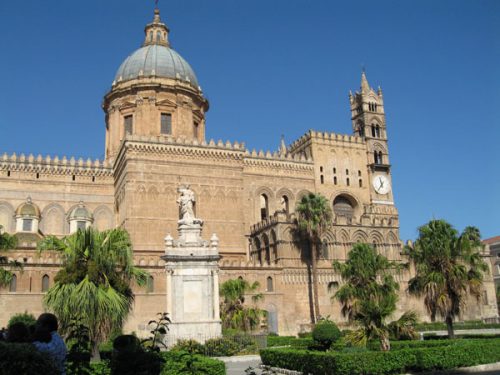 There is an interesting story behind how the airport was named Falcone-Borsellino Airport.  Two judges named Giovanni Falcone and Paolo Borsellino were killed by the mafia (Cosa Nostra) in 1992 for their stance against local crime.

In honour of both men a plaque was erected which features their portrait. It can be found at the entrance of the Departure area. On the plaque the words “The Pride of the New Sicily” are written.

An information area can be found on the 1st floor of the airport. Getting a taxi into the city will take about forty minutes. Expect to pay between thirty five and forty euro for this.

If you are not using our cheap car hire Palermo Airport option, there is a train service from the airport to the centre of Palermo which runs frequently.

This service takes about forty five minutes and costs four euro fifty cent. There is a bus service available to the city every half hour. This takes about an hour and costs less than five euro.

Sicily is an excellent place to go on holiday that offers something for everyone. Check out our car hire Catania Airport service as well as the cheapest car hire Trapani Airport deals.